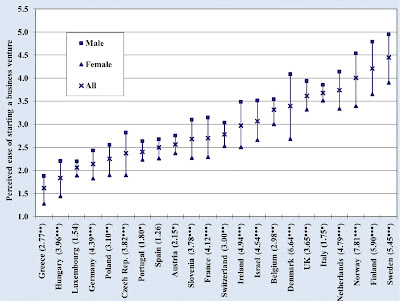 How easy is it to start a new venture? The graph shows how people answer this question across many European countries. To the right, there is a surprise for those who listen to Fox News, because the Scandinavian countries (all of them supposedly socialist and anti-business) are where people believe businesses are easiest to start. From left to right, there is a big non-surprise for those who study entrepreneurship, because in all nations shown here, men consider it easier to start ventures than women do. Indeed, the graph is disappointing for those who think that Scandinavian gender equality extends to entrepreneurship, because it clearly does not. More on that in a moment, because this finding makes more sense after looking at some recent research.

The graph is from a recent article in Administrative Science Quarterly by Vartuhi Tonoyan, Robert Strohmeyer, and Jennifer E. Jennings, who have investigated the source of gender differences in the ease of entrepreneurship. Their idea is simple and powerful: because entrepreneurship starts with experience in the labor force, different treatment of men and women in the workplace is the origin of their different sense of how easy it is to form a venture, and also of their success in forming and growing new ventures.

We know from research on the labor market that the following are true: 1) women are less likely to be promoted into management positions, 2) women are concentrated in certain occupations with less pay and independence than typically male occupations, and 3) women are concentrated in certain industries that are less connected to the market economy than typically male industries. These patterns hold across levels of worker education and job prestige. The plumbing contractor is more likely to be male. The municipal administrator (especially at the bottom level) is more likely to be female.

These labor market patterns form beliefs about entrepreneurship because our experiences at work help prepare us for entrepreneurship—or don’t. There is a distinction between a manager and an entrepreneur, but the distinction is smaller than that between a low-level worker and an entrepreneur. Managers (many of them, at least) and entrepreneurs obtain and allocate resources, formulate goals and pursue them, hire employees, define their roles, and evaluate their work. Having experience as a manager gives people confidence in their ability to start a venture, as well as a useful comparison point: management can be just as stressful and time-consuming as entrepreneurship but in support of someone else’s venture, not your own.

Stereotypes about what women can and should do have held them back from such management roles, as well as from certain parts of the labor market. Many women have been directed into typically female roles – caring and serving roles – and positions supervised by others, usually men. This has led to a list of occupations and jobs in which workers accumulate less experience relevant to entrepreneurship. For example, even though restaurants are famously easy ventures to found (and usually quick to fail), I have met only one restaurant owner who started as a waiter, and he was a man. And women are heavily weighted in certain industries, like public administration, which are remote from the markets in which entrepreneurs form new ventures.

So it is hard for women to escape discrimination in the workplace by pursuing entrepreneurship. They are found in exactly those roles and workplaces with the hardest paths to entrepreneurship, so they are disadvantaged in both games. No wonder women have to do more than men to succeed.

Oh, and the Scandinavian gender equality I mentioned at the start? Scandinavian nations are relatively good at avoiding underpayment in stereotypically female industries like public administration, and in stereotypically female occupations too. But that does not mean that people think differently in those nations than they do elsewhere in Europe. So in the absence of strong economic reasons to go against the flow, men and women have done more gender sorting in the Scandinavian labor market than in many other nations. As one would expect, the result is that Scandinavian women find it much harder to start a venture than men do, though still easier than a man in France or Germany.