Why Can a Firm Like Samsung Do Well? Compare and Compete 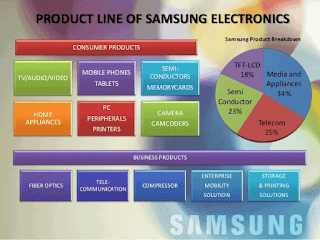 Take a look at the product line graph of Samsung Electronics pictured here. As I am sure you know from entering any consumer electronics store, they have all sorts of entertainment systems including large TVs, a lineup of high-performance mobile phones, computers and peripherals, cameras, and even washers and dryers. In addition to that, they make many of the electronics that go into these devices, such as microprocessors, memory, and other semiconductor devices. For businesses they supply a broad range of communications equipment both wired and wireless. They are the archetypical diversified corporation that is not supposed to exist anymore and that in many economies (such as the U.S.) has been dismantled and sold at a profit. But they still hold together.

It is not because of friendships among managers – the way to get promoted is to do better than your peers, so it is a fiercely competitive company internally. Compare your performance with the nearest department, function, or division, and find a way to do better than it. But if the diversified corporation isn’t a way to bring people working on different but related businesses together in a somewhat friendly way, what is it for? The departments or divisions might as well be different corporations, because they would definitely compare and compete then too. In a recent paper in Administrative Science Quarterly, Oliver Baumann, J. P. Eggers, and Nils Stieglitz found a key to the answer. Interestingly, it is exactly through competition that such corporations can do well. They are unique because both the type of competition and awards from competition are nearly the opposite of what you see between independent companies.

The type of competition is nearly opposite because corporations that compete want to win the support of customers, but divisions that compete want to win the support of headquarters. The awards from competition are nearly opposite because customers provide cash from purchases, but headquarters provide budgets to operate and invest. The two are different because headquarters’ money can be directed into specific activities such as research and development, which helps the division explore new grounds. Customers’ money can do the same, but it has many other uses including the simple option of using it to spend more to win customers’ support for exactly the same products.

This matters because a smart headquarters knows that an ambitious division that wants to win can make smart and aggressive investments in technologies. Often these will be too ambitious, so the division ends up losing money, but there is a solution to that. As long as the corporation has divisions with complementary products, there is usually a benefit to some other division as well. What is required is complementarity among divisions so that both winner and loser investments for one division can become winner investments for the corporation. Look at the Samsung product line again. It is full of complementarity. There are devices using the same parts, exploiting similar intellectual property, and shaping complementary customer preferences. The diversified firm still has some life left if it remembers to compete, compare, and invest in technology.

Do Auditors Prevent Fraud by Firms? It Depends

The relationship between an auditor and the audited firm has always been interesting. Auditors are supposed to check the firm’s financial accounts and approve them, which lets others such as investors and the state know that the firm is not misrepresenting any information. They have some other duties as well, but you could say that auditors save the investors from seeing artificially high profits and the taxman from seeing artificially low profits. So who hires the auditor, the investors or the state? The firm does. That’s why it gets interesting, because it means that the auditor is implicitly hired to keep the firm within the rules for investors and the state while serving the interests of its management.

In a recent paper in Administrative Science Quarterly, Aharon Mohliver looks at an even more interesting part of this relationship by doing research on the role that auditors played in first condoning, then spreading, and finally extinguishing a questionable practice firms began to use when changes in the tax code affected their ability to pay managers above a $1 million cap without subjecting them to significant tax liabilities. At first the practice was questionable but not illegal, and auditors in some local offices helped their client firms start using it. The findings tell a very informative story of how auditors pay close attention to the interests of the managers who hire them, and also to the fine line between legal and illegal.

The questionable practice is called stock-option backdating. Stock options are often given to managers because they let managers earn higher income if the value of the firm increases, and to make them fair they are often given (for free, of course) at the exact value of the firm on the day they are given. In MBA-speak, those options have upside potential, no downside potential, and are incentive compatible. In plainer words, they reward managers for effective management but don’t punish failure. Firms report the costs of stock options as compensation expenses.

What I just explained is a regular stock option, without backdating. A backdated stock option looks just the same, but in reality it has been assigned an earlier formal date than when it was given, and that formal date somehow turns out to be a day just before the firm had a big increase in value. Through what seems like a very lucky dating of the option, the managers getting the backdated stock option earn significant sums of money not taxed as regular income. Backdated stocks are a trick for compensating managers at the expense of investors. They are a form of fraud, and though they were unethical from the start, initially there were no laws or rules against backdating so they were not yet illegal. (There were no rules because no one making rules had thought of backdating stock options.)

So the auditors stepped in. They spread knowledge of backdating from one client to the next, especially if clients were part of their local and dense communication networks. They were also sensitive to lawmakers, however, so this spreading of backdating was strongest when the uncertainty about the legality of backdating was greatest. When it became more certain that backdating would be made illegal, the auditors stopped spreading the backdating trick, and when it actually became illegal they stopped its use in the firms that had already started using backdating. So, auditors follow written law very well, are neutral to law that will soon happen, and are willing to help management profit from legally questionable conduct. Nice to know if you happen to be a manager, investor, or lawmaker. If you are an auditor you probably know it already.

Posted by Henrich R. Greve at 3:13 PM No comments:

Applications are part of life. Some are minor, like applying for a library card; some are consequential, like applying for a job. Often the consequential ones involve selection of a few from many, like applications for work or study admission. We usually think that they should be decided based on merit. Partly this is because we care about fairness, and partly it is because the selection matters for the workplace and the school too, not just for the applicant. Selecting the best should give the best results.

So what exactly is the purpose of having others endorse your application? Maybe you have never done that, but it is common for applicants to have others contact individuals who could sway the decision. Is it a way of cheating, by bypassing the evaluation of merit? Is it a way to get attention so the merit gets considered more carefully? Or is it simply useless? The question is important because so many crucial decisions happen through application processes in which some but not all applicants are endorsed. A recent paper in Administrative Science Quarterly by Emilio J. Castilla and Ben A. Rissing has looked closely at what happens, using applications to an MBA program as their data. The results are interesting. 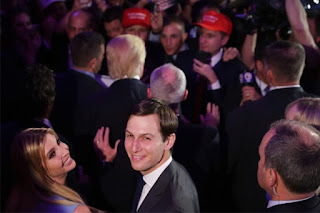 The dim view of endorsements as saying nothing (good) about quality is at least partly true. The endorsed applicants were sometimes (not always) rated as stronger “on paper” as seen through CVs but often were scored lower than the non-endorsed applicants in interviews. Yet in the end, endorsed applicants were more likely to be selected for program admission – twice as likely, in fact. Clearly, getting endorsed is a good idea for those who are almost good enough to make it based on merit. This is not because their applications are examined more carefully. There was no evidence that the same qualification was discovered more easily when the applicant was endorsed. Instead, the endorsed applicant was more likely to be selected even if his or her qualifications were good but not the best.

But there were two differences. One seems minor but is interesting. Endorsed applicants were more likely to lead a student club while in the program. Maybe endorsement is a sign of good citizenship? The other is not minor at all. Endorsed applicants gave larger donations to the school five years after graduation. So in a way, it is better to select endorsed applicants, but it is in a follow-the-money way. They repay the favor of being selected, while those who were selected purely on merit have less reason to pay back – or maybe they have less (family) money.