iSpy Denial: Why Firms Need to Do the Right Thing


The news on the activities of National Security Agency (NSA) include a story that has been overlooked by many: there is a leaked document about a piece of spyware software called "DROPOUTJEEP", which makes an iPhone reveal significant information about its owner, including details such as files stored, messages sent and received, phone calls, and location. Apple has issued a denial that it collaborated with NSA to make this program. The denial is interesting because the document says nothing about a role of Apple in creating this software, and the NSA is perfectly capable of making spy software without help from the maker of a device. In user forums there have indeed been allegations that Apple is involved, but such allegations typically happen and don’t have much weight if there is no supporting evidence.

So why does Apple care? We could take a hint from the reactions of other technology companies to information on NSA activities to monitor their users. Google, Facebook, and Yahoo have issued angry responses to reports that NSA were listening in on their user’s communications by doing the Internet equivalent of a wiretap. Google went a step further by using encryption so that NSA would be left with a decryption task if it was able to continue wiretapping Google’s communications. That is a hard slap, because listening in on the internet is fairly easy, but decrypting digital communications takes a lot of time and computing power.

Apple, Google and other firms are not against national security. They do, however, dislike any technologies that will let the government monitor their users without legal backing. And because their managers are practical with respect to what they like and dislike, we can conclude that they are well aware that their users dislike such monitoring too. We know that customers can react by backing off from transactions with firms that do things they are against. That finding was in a paper by Stefan Jonsson, Takako Fujiwara-Greve, and myself on how a scandal involving favoritism in an insurance company led to withdrawals from mutual funds that customers saw a similar to insurance.

But now there is new research on others who have opinions on what firms do, and can react to it. Amandine Ody-Brasier and Freek Vermeulen published a paper in Administrative Science Quarterly looking at the pricing of grapes to Champagne producers. One would think that grapes had a single price, or at least one that was only determined by quality, but in fact there is substantial variation in the pricing. And here is the interesting finding: Champagne producers who were doing (or suspected of doing) things that the grape makers disliked, such as having a non-French subsidiary or making Champagne under a store brand, were secretly punished by having to pay more for their grapes.

So firms that are concerned with keeping a distance between themselves and any rumors of misconduct and scandal are doing the right thing. Not only is misconduct an embarrassment, it can also be punished on both sides, by suppliers and customers. Walking the straight and narrow path seems to be the way to get to profitability.
Jonsson, Stefan, Henrich R. Greve, andTakako Fujiwara-Greve. 2009. "Undeserved loss: The spread of legitimacyloss to innocent organizations in response to reported deviance." AdministrativeScience Quarterly 56(June):195-228.
Ody-Brasier, Amandine, and Freek Vermeulen. 2014. "The Price You Pay: Price-setting as a Response to Norm Violations in the Market for Champagne Grapes." Administrative Science Quarterly 59(1):109-44.
Wakabayashi, D. 2013. Apple Denies Working With NSA on iPhone Backdoor. Wall Street Journal, 31.12.2013.
Posted by Henrich R. Greve at 12:23 AM No comments:

Will a UK firm ally with a US firm or a French firm? National strife and firm alliances


Pakistan has India and Afghanistan as neighbors, and there is shared ethnicity and language across the borders. Still, it is not clear to us that a firm in Pakistan will choose an Indian or Pakistani firm as an alliance partner. UK is much closer to France than to the US, but we think of a special relation between UK and US that goes beyond the shared language. Would it surprise us to see UK firms ally more with US than French partners?

Let’s not explain our intuitions on these  nation pairs through some soft culture concept. We know that there have been threats of wars and actual wars between the less likely pairs of nations in these examples. Well, there was also a war between the UK and US also a while ago, but it is nothing compared to the UK-France relation. In fact, it is possible to link nations through their ties of animosity, as in the figure below. 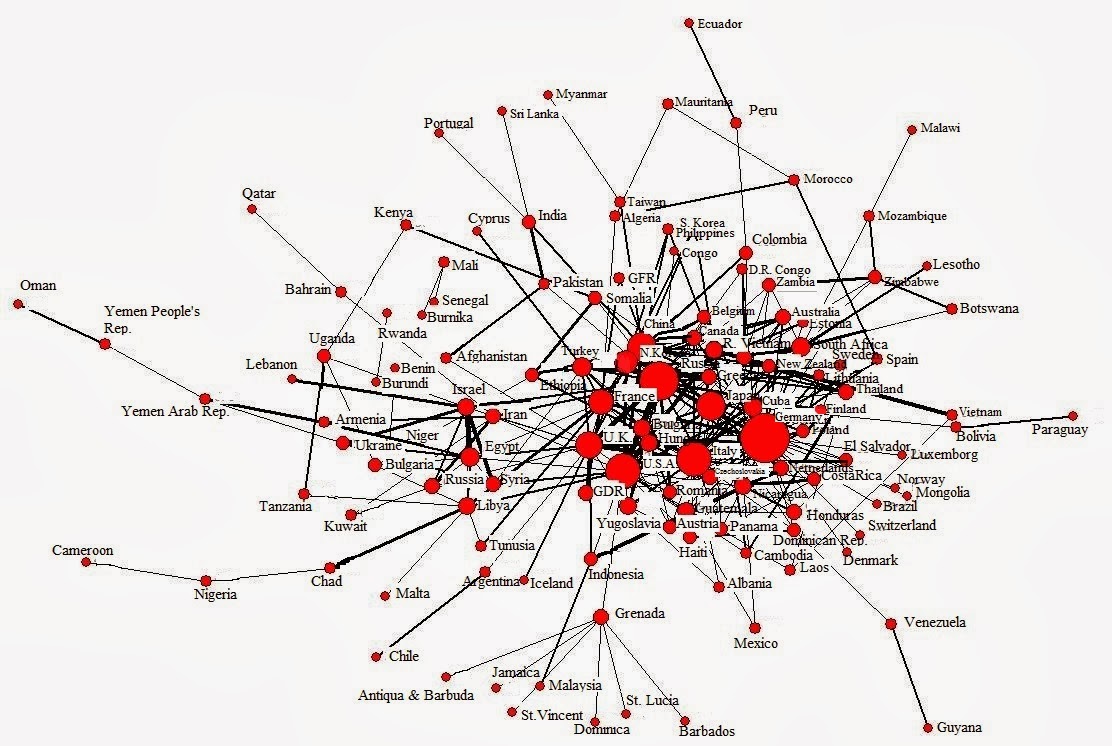 The figure is part of a research paper published in Academy of Management Journal by Ilgaz Arikan and Oded Shenkar, who examined the effect of nation animosity on firm alliances. Their idea was that national animosity would affect the climate of trust such that firms would prefer some partner nations over others even if the animosity was more a traditional residue than an actual threat. After all, invasion threats between UK and France have not been issued for a while.

So what can make alliances possible between two nations that historically have been in strife, but now are not and have firms that need each other? The question is a real dilemma because firms can suffer if their alliances choices are driven by history more than by economic value. Well, there are some conditions that help nations become more attractive, even if they have been in strife. The conditions are not entirely nice, but they do help. Basically, the potential partner nation looks more attractive if it is generally hostile to other nations, rather than singling out the nation of the firm. It also looks more attractive if there is a lot of variation in how it treats other nations. Under both of these conditions, the deepest kind of alliances involving equity are likely to happen.

So, the worst situation is when the firms that your firm needs most are in a nation that is peaceful to all other nations than your own. In business, it is best to stay away from sworn enemies, including sworn political enemies. It is just one more detail to consider in the craft of putting together an effective portfolio of alliances, and one that is so new that we did not even consider in our book on Network Advantage.