Media and Management: Are Firms Easy to Control?

Who do firms answer to? Among researchers and the press, there has been much talk about how firms are willing to ignore a wide range of environmental and social concerns. This discussion is often coupled with the observation that firm pay inequality drives economic inequality. On the other hand, many firms were pioneers in the Black Lives Matter movement, and before that they put pressure on states seeking to enact discriminatory laws. So, which is it?

In research published in Strategic Management Journal, Andrew Shipilov, Tim Rowley, and I looked at whether firms respond to one particularly influential actor – mass media. We examined a very controversial firm action – changing the governance structure to give the board of directors greater control over the CEO and top management team. This type of change is a good indicator of whether the firm is responsive or not, because it goes against top management interests but had significant press coverage for a while.

The key observation we made is that media not only talks positively about what are good governance structures; newspaper articles also describes individual firms. Articles can contain praise or critique. Articles can even contain emotional words, which can be either positive or negative. A person reading a newspaper article describing the governance of a firm can easily find out whether the firm is viewed positively. If that person is the CEO of Chair of the Board, a negative article could be a reason to reconsider the current governance.

Did this happen? Fortunately, newspaper articles can also be read and interpreted by laptop computers, so we asked ours to look at them. We found that firms were indeed responsive to press reports, and they responded in more ways than we imagined when we started the research. First, does a firm improve governance when it gets negative press coverage? Yes. Critique from the press is a problem to solve, and the solution was to act – not to ignore it.

Second, what did firms do when it received positive press coverage of the governance? They improved it further! The press discussing governance set the agenda, which pushed the firms to make subsequent improvements, especially because many firms received press coverage with praise exactly because they had improved their governance. So, they made further changes in response to this praise.

Third, firms also learnt from each other. Many boards of directors are interconnected because the same person serves two firms. These connected board members were like bees spreading the pollen of good governance: when one of their firms had been criticized for poor governance, they advised other firms to avoid this fate.

Firms are not unresponsive: they answer to society. The reason they are often thought to be unresponsive is that they are selective about when to respond, and who to respond to. Any issue that becomes important in mass media and a source of praise and criticism will get their attention. As suggested by their recent responsiveness to social issues, and as we showed in our research, they can respond quite powerfully.

2019 "Is all publicity good publicity? The impact of direct and indirect media pressure on the adoption of governance practices." Strategic Management Journal, 40: 1368-1393.

We often use the term “firefighting” to express that we are solving urgent and serious problems in organizations, and anyone who has been involved in firefighting knows how important it is to act at the right time and synchronized with others. I have certainly seen things fall apart when someone responds to a problem too late or when someone responds so soon that others are unable to coordinate. Too fast and too slow are both problematic. How, then, to make organizations reliable firefighters?

To study this problem, Daniel Geiger, Anja Danner-Schröder, and Waldemar Kremser studied real firefighters in an article published in Administrative Science Quarterly. Their idea was that the problem of coordinated responses to rapid and unpredictably changing situations is something that firefighters face so often, and need to address so reliably, that we can learn from how they prepare and execute. Importantly, fire departments are just like other organizations in that they usually do not face significant surprises, so they can develop routines for normal situations and be ready to adapt when a fire or other emergency goes off script. 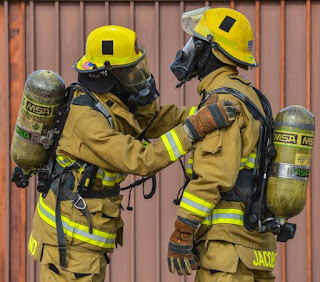 What did they find? Interestingly, the concepts of routine, duration, and event, which organizational scholars care about and think that real workers do not pay attention to, are central to how firefighters organize. Before acting they plan (“triage”) their approach. When multiple teams are needed, they pace themselves to be in sync. When problems are discovered, commands are used to react to the event and change the approach.

This does not mean that firefighters work as fast as possible, contrary to what one may think from television and movies. Exactly because teams may be out of sight of each other but need to be synchronized, they have to pace themselves carefully. Exactly because they can encounter surprises such as suddenly learning that a person is missing in a burning building, they need to be organized so they do not over-commit but can respond flexibly. The pacing and the caution slow them down, but in return they get reliability and flexibility.

Are these approaches effective? We don’t know that they are the most effective possible, but they are routinely used and flexible enough to help firefighters address situations involving significant risk to lives and value, as well as very unpredictable events. They seem robust.

How are these approaches developed? Firefighters are trained, of course, and the training gives them the basic routines and ability to flexibly respond when a situation changes. Indeed, the simulated fires used in training are designed to contain surprises. Following the training, they gain experience in handling a wide range of firefighting tasks, starting in the role of a team member who follows team leader instructions and learns by observing experienced team members. They learn to take cues from how others react to alarms, and they learn the firefighter and team leader mindset.

This mindset is particularly interesting because firefighters think and talk about time a lot. Using their words, they want to “get ahead of time” always, and they fear “running behind.” The key skill they develop is to quickly understand the situation well enough to choose the right routine and to coordinate actions accordingly. Routine, duration, and events are exactly the concepts our theories obsess over, and firefighters put them together in a very flexible and robust way.