Crocodiles in the Water: Incentive Plans and Employee Responses

Today I went to the Sungei Buloh wetlands reserve in Singapore and spent time looking at a flock of storks that were feeding in a pond. At some point four of them came across a crocodile party hidden in the water. They were interested in this unfamiliar creature, but decided that it was safer to cross it at the tail end than the front end (see the picture below). Good choice; even a full crocodile will be sorely tempted when food walks in front of its mouth.

I can imagine that bankers are also worried about crocodiles in the water these days, as they are putting in place new systems to control risk while rewarding high performance in response to rule changes and various cases of misconduct (see my earlier posting). The crocodile, of course, is that the newly designed systems will backfire and cause damage, just as the old ones did. I can imagine that much effort is spent thinking about the design of these systems, and probably it is also helped by economic models of how individuals respond to incentives.

What the bankers probably know, and anyone designing an incentive system should know, is that their best planning and the best economic models still is not enough ensure that the system will be passing the tail end of the crocodile, and not the rear. The problem has two sides: the manager creating the system is not sufficiently rational, and the employee inside the system is more creative than the manager thinks. As a result, the employee gradually learns to trick the system in ways that the designer had not imagined. Various pieces of evidence in favor of this proposition has been available before, often from blue-collar workers on piece-rate systems, but now Tomasz Obloj and Metin Sengul have produced strong evidence on incentive system in banking, no less.

They showed that a new incentive system initially increased productivity and gave a high share of this increase to the bank, while still rewarding the employees. Over time, two things happen. First, the employees learn to capture more of the value created by their extra productivity. Second, the tricks they use in order to make that happen are risky from the bank’s point of view, because they can raise costs and may lead to lost sales (the article has the details on why that happens, as well as many other interesting findings).

The storks could safely navigate the crocodile in front of them because it was only half hidden in the water. Managers designing incentive systems are facing future employee behaviors that are completely invisible because the employees themselves would not have thought of them until they saw the incentive system. How confident are we that the managers will be right more often than the storks? 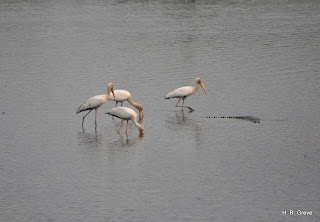