OK, admit it right away: you know what Lady Gaga's shoes look like. You may also have heard that the look is the work of Japanese designer Noritaka Tatehana, who totally puzzled his art college professor by turning in such shoes as a graduation project. But the designs delighted Lady Gaga, and immediately he became a star shoe designer. He is still not 30 years old, but he is beginning to have stardom enough to benefit others. He is starting a gallery called Pocket in Tokyo, which will be devoted to showing off young Japanese artists and helping their career. 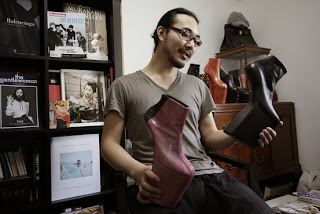 The tale of the shoe designer becoming an art promoter sounds a lot like something that could only happen in the world of design and art. After all, many people think of this as a world in which the criteria for judgments are unclear, assessments are very subjective, and status can be gained just by being near someone else with high status and having a flock of followers. But is this so different from business? It has been a while since research showed investment bankers and their customers to be hugely status conscious in their decisions (see Podolny's work). There is a lot of uncertainty in business, because so much of what is being done has to do with the future performance of a product, a research team, or an entire organization. Status matters in art and in business.

Podolnly did not choose the investment bankers as a topic because they are less rational than others; it just happened to be easy to measure their status rankings. Later research has shown status to influence many business decisions, and to be especially important for young firms because of their uncertain futures and need to collaborate with others. It really matters who they work with, because the status sets the path for their future. In other words, Noritaka Tatehana understands well something that firm founders should pay very close attention to: the connections at the start are truly important.

The role of status in alliances is something that I have written about in the new book with Tim Rowley and Andrew Shipilov (www.networkadvantage.org). We don't understand shoes that well, but would give Noritaka Tatehana top marks for his understanding of how business works.