You are probably familiar with the corporation Starbucks, and you may also know that its stockholder value is nearly 60 billion US dollar, in part a result of having annual sales of more than 80,000 dollar per employee. Just so you don't misunderstand the last number, Starbucks uses the franchise system with many outlets outside the U.S. owned by contractors, so many of the staff members you see internationally are not Starbucks employees.

For most coffee chains, expanding currently means challenging Starbucks somewhere, or at least some other coffee chain that has a similar product line, ownership, and strategy as Starbucks. It is far from easy given the long experience the largest chains have in making appealing product lines and effective operations. Now there is news that a brand that failed once, Juan Valdez, is going to try again with a new international chain of coffee shops. Juan Valdez sells Colombian coffee, and is aiming to expand to 250 stores by the end of this year. That will make it more than one hundredth the size of Starbucks, so we are talking about a really really small challenge.

So why is this interesting? You may already have noticed that it sells Colombian coffee, which is a little different from the selection of coffee beans found in many other chains, combined with drinks that are made from blends where the customer knows little about the origin. The reason for the Columbian coffee specialization is that Juan Valdez isn't really a normal corporation: nearly all shares are owned by Columbian farmers through their Federation. Although it is incorporated, the reality is that Juan Valdez is a farmer cooperative oriented toward export of farm goods. (Actually the corporation name is Procafecol, but I like the brand name Juan Valdez better.)

If Juan Valdez succeeds, Columbian farmers will benefit greatly. But will consumers be interested? An important key to the appeal is that coffee is one of the products that has started triggering social conscience in consumers, many of whom are aware that the prices keep increasing (bad weather is the reason this year) while poor farmers keep getting low prices. Buying coffee from the most impoverished places makes no difference; buying from corporations with fair trade practices helps a little; buying from a cooperative would help more.

All this sound promising, and cooperatives have in the past been proven to be quickly growing, as I have documented in a paper with Hayagreeva Rao on the cooperative movement in Norway. But we also showed that the appeal was local: communities with past experience with consumer ownership liked cooperatives much more than communities lacking such experience. This is a challenge for Juan Valdez because many markets that they target lack such experience, so they have to target individual consumers rather than the practices of a community. It would be interesting to see if they can succeed. At least they have some ideas that stir the interest (and conscience?) of consumers, like the live Juan Valdez character used in advertising (see below). It is a fun image, but the serious part of Juan Valdez is the cooperative of farmers trying to reach consumers directly. 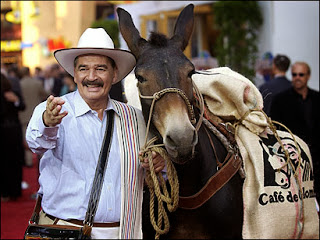