Every now and then we hear news about employees who are engaged in wrongdoing of various kind, usually harmful to customers and employees. The most spectacular have been financial fraud, as when traders lose money while performing trades that break the internal rules of their banks. UBS trader Adoboli was convicted for unauthorized trading that led to a 2 billion dollar loss; Barings Bank trader Leeson was convicted for unauthorized trades that lost 1.4 billion dollar. Barings Bank went bankrupt; UBS bank stock owners (and surely, customers as well) suffered financially from the losses.

We often think of such wrongdoing as being the result of bad employees acting against their company, but is that really the right story? It is certainly a poor fit with these trader cases, because both of them started trading out of control after losing money, not while making a profit. You could see them as trying to avoid getting fired, but surely that does not fully explain risking lengthy prison terms.  In fact, an odd but plausible true explanation is that their wrongdoing was an attempt to save the firm from losses.

Research supporting this explanation has been done by Donald Palmer and Christopher Yenkey, and will soon be published in Social Forces. They looked at another context with some famous wrongdoing: the cycling race Tour de France. There, the beginning of blood monitoring in the 2010 race makes it easy to investigate which cyclists likely engaged in blood doping or drugging, even if they did not get blood values suspicious enough to fail tests. Of course is well known that Lance Armstrong engaged in doping for many years and was stripped of 7 wins; not everyone knows that Alberto Contador was declared winner in 2010, but lost the victory after a drug investigation. The key point in Tour de France is that players may cheat to benefit themselves and their team, and it is actually possible to test what makes them most likely to cheat.

So what determined cheating? The role in the team is most important, because specialists such as team leaders and sprinters had the most suspicious blood values, while their supporting cyclists had the second-most suspicious values. Members of teams that let each cyclist compete individually were least likely to cheat. People don't cheat for themselves as often as they cheat for their organization.

So we have an interesting result that should give pause to anyone who sees wrongdoing in organizations as a result of individuals looking out for themselves. It could be exactly wrong: they are trying to help their employer. This means that the right response against wrongdoing is not more organizational control of what people do, but less pressure to win. 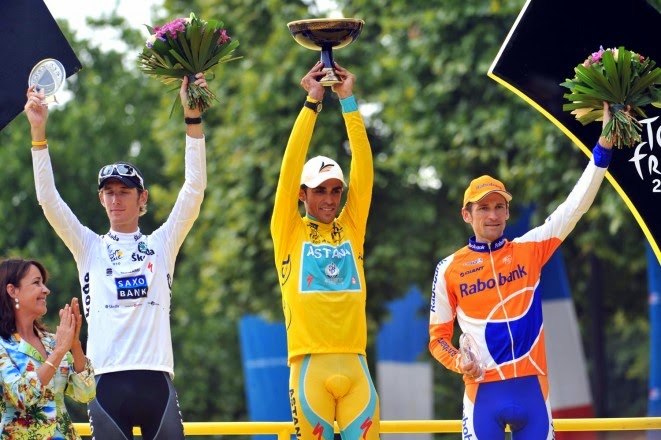 Alberto Contador (center) celebrating his Tour de France victory.
To the left is Andy Schleck, who has now been declared the winner.
Posted by Henrich R. Greve at 6:30 PM