What is a Service Designer? Who Cares? 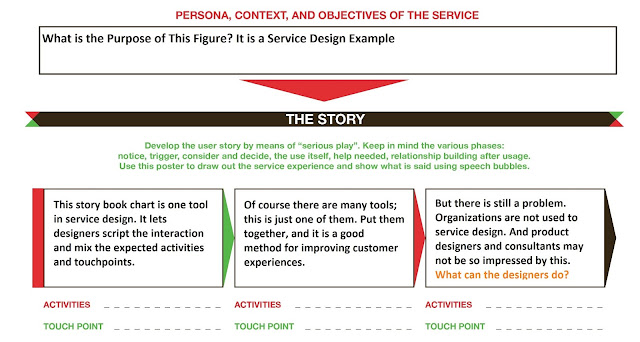 The figure above illustrates well the problem that service designers face. They are a new occupation and seek a role in designing how organizations interact with their customers or clientele, both for firms and public organizations. Such interactions have either been ignored before, or done by other occupations – for example, as part of consulting contracts. Given how important service is in the modern economy, it seems reasonable to design services – just think back to the last time (earlier today?) that bad service annoyed you or created a problem. Probably the first thing that comes to your mind is a minor annoyance, but keep in mind that hospitals and airlines are also service providers, and both of them need to avoid mistakes. Service design is useful, but new occupations always have to establish themselves as distinct and necessary. How is that done?

A forthcoming paper by Anne-Laure Fayard, Ileana Stigliani, and Beth Bechky in Administrative Science Quarterly explains how the service designers found their place. They focus on the tools they used to gain a mandate as an occupation that has a distinct role in the organization, with clear authority over some tasks. Clearly the methods they developed – like the figure above – was an important part, because any methodology not held by another occupation creates distinctiveness. The closest competitors were management consultants and product designers, and none of them used such scripting tools. Service designers also developed other tools for interacting with customers and understanding their needs well.

The paper provides more detail, and tells an interesting story of how an occupation created itself out of nothing and made what looks like a clear mandate and a well-defended position for itself. Service design is here to stay. So, next time you experience service problems, you can ask yourself if service design has not been done, or whether it has been done poorly.

Fayard, A.-L., Stigliani, I., & Bechky, B. A. 2016. How Nascent Occupations Construct a Mandate: The Case of Service Designers’ Ethos. Administrative Science Quarterly.