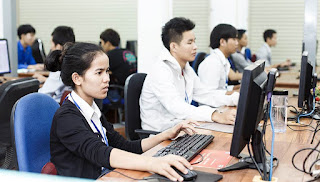 Digital Divide Data (DDD) is a commercial enterprise doing data-entry work for profit. It is also a social enterprise that trains Cambodians to obtain better jobs than the ones they do for DDD. Is that a contradiction? Maybe it is not fully contradictory but instead just a tension—one that many social enterprises handle because they need to sustain themselves commercially, not just do good work. We have long known that the dual purpose of social enterprise is seen as a contradiction internally and can lead to various problems and coping strategies, but we have not known much about the long-term effects.

Now we know more, thanks to an article in Administrative Science Quarterly by Wendy Smith and Marya Besharov. They followed DDD for more than ten years, seeing it as a great example of the effects of how such contradictions are dealt with over a long time. It is a great example both because DDD has coped with them well, while many other organizations break apart or fail, and because it has faced a particularly difficult tension between its commercial and social work, as the commercial work has slim margins and some of the social activities can undermine it seriously.

What do we learn from DDD? As you might expect, the answer to such contradictions has more than one part, but here I want to describe just one: guardrails. Establishing guardrails is a way to set up the organization that follows some old organization theory almost to the book, although the DDD founders may not have been aware of it. In a hybrid organization like DDD, whose commercial and social activities are both important, one of the many possible solutions is to make sure that the organization holds strong advocates of each one and is not set up to let one type of activity dominate. That setup results in a battle for dominance between these advocates and between the coalitions they can muster for support whenever a critical problem arises.

That sounds like a noisy and costly way to organize, and it is. But its key feature is that the battles arise whenever one coalition sees the organization as going too far in one direction and neglecting the other, and the battles help to pull it back to the center. As long as the organization can balance its activities, it is peaceful. That’s why competing advocates and coalitions function as guardrails – they keep the organization from going off track and favoring one mission over the other.

The reason this is important is that hiring advocates for contradictory positions without giving priority to one looks like a way to generate problems for the organization. There is not one overriding mission, there is not a clear organizational identity, it is not possible to predict when conflicts will start, and it is hard to predict how they will end. But all these frightful sources of noise help stabilize the organization and resolve the tension between its contradictory goals and activities.