Do We Trust the Firefighter Who Finds Fires or Books Exciting?

One of the most studied and least understood aspects of life is how people decide to trust each other. Trust is not much on our minds in daily life, but that is because trust is not needed for most of what we do. When shopping, we know that a credit card payment probably won’t lead to fraud later on and that the change we get when paying with bills is not fake currency. In traffic, trusting others is more important, but we generally trust that other drivers know the rules of the road, except perhaps if we’re on a bike.

In some areas of life, trust is very important, including on the job. Even in occupations that are mostly safe, every now and then there may be dangerous situations in which trust in others is important. Trust matters because danger triggers a fight-or-flee dilemma: you can try to solve the problem, at some risk to yourself, or you can escape and let the problem get worse. When solving a dangerous problem calls for teamwork, it is important that everyone makes the same decision. 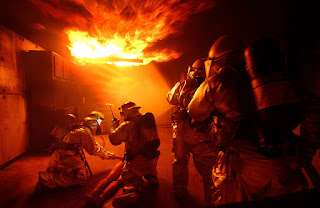 This type of trust is the inspiration behind a recent paper in Administrative Science Quarterly by Michael Pratt, Douglas Lepisto, and Erik Dane. They looked at firefighters, whose occupation calls for risky teamwork. They have to trust that others will “have their back” in fighting a fire when the situation gets dangerous, so that each can rely on the other. Firefighting is especially interesting because firefighters don’t actually spend much time fighting fires. The increased fire safety of buildings and the need to have enough firefighters on the payroll in case of large fires means that they spend most of their time waiting for calls or handling emergencies that have nothing to do with firefighting. Helping cats down from trees is mostly a myth, but vehicle accidents, gas leaks, and emergency medical assistance are facts of life – firefighters can often get to a scene before the ambulance.

The problem with having safe buildings is that firefighters have little direct evidence from fighting fires together of whom they can trust – when they’re called to the scene of a fire, they may not have ever seen each other fight fires. That means they have to operate on trust derived from indirect evidence. I started by saying that trust is well studied and little understood. One thing we do know is that when people try to decide whom to trust, they look for signs of trustworthiness. When this happens in occupations, the signs may not make sense to outsiders, but they are very real for the people involved. The firefighters in this research tried to understand where their colleagues were coming from, both in their backgrounds and in their attitudes toward the everyday chores at the firehouse. Based on small or large signs they picked up in their early interactions with a newcomer, they would put the newcomer into a small set of categories. And here is where the interesting part lies, because the categories did not inspire the same amount of trust.

The firefighter who has a college education? That one is the “book-smart” type and is not  a commonsense type whom you can trust to think quickly and do the right thing in a dangerous situation. The firefighter who buys his own scanner and goes to fires even when he’s off duty? That would be a “spark,” who has the right motivation but is too excitable and thus is only warily trusted.  Less trusted is the “paycheck” firefighter, who is there for only one reason and likely won’t take risks to help a fellow firefighter out of a burning building. So who is trusted most? For firefighters it is the “worker” type, who they see as always reliable and careful – someone who combines the professionalism of a (good) plumber with the discipline of a soldier, who checks the equipment, cleans up, or does whatever else needs to be done when there are no calls. So the answer to the question of who do you trust is that if you are a firefighter, you probably don’t fully trust the colleague who is just book smart, the one excited by fires, or the one who’s there for the paycheck.

If you are not a firefighter, the answer to the question is different. You don’t know who to trust, and you can’t tell who is of what type. That’s part of how organizations work, because they contain occupations and jobs that have internal codes understood by few others, including management. That’s one reason why managers should be careful not to judge quickly when they see behaviors they don’t understand. Look inside the thinking of the people responsible, and things make more sense.

Pratt, Michael G., Douglas A. Lepisto, and Erik Dane. "The Hidden Side of Trust: Supporting and Sustaining Leaps of Faith among Firefighters." Administrative Science Quarterly, forthcoming.