The Sinner as Savior: How Marijuana became Medical

Ideologies and businesses mix uneasily. They can sometimes work together, as when social movements help promote a form of business. For example, socially responsible investing has grown that way. They can also be in conflict, as when an industry runs counter to strong societal beliefs. Other industries can sidestep ideological resistance. For example, coal-fired power plants can ignore global warming because people cannot always choose how their electricity is made. But in other industries, firms are hurt because their potential customers are turned off by the stigma attached to the business, sometimes including its legal status.

What to do when your industry is stigmatized? Kisha Lashley and Tim Pollock examined this question in a recent article in Administrative Science Quarterly, using the cannabis (marijuana) industry as an example. Their study is a good illustration of how an industry that was both illegal and stigmatized, and still is illegal at the federal level in the U.S., can act to overcome its stigma. The change for the cannabis industry hinged on one feature of the product: marijuana is not just a relaxing intoxicant but also a painkiller. This may seem inconsequential considering how many medical painkillers are available, but it matters for two reasons. First, patients differ in how they respond (or not) to painkillers. Second, the most powerful medical painkillers are addictive, such as the opioids that currently kill so many.

This painkilling feature was used to create a new ideology built around marijuana as a product that could help patients who were suffering and did not have other good options for relief. Activists, politicians, and others worked to legalize marijuana sales so these patients would not need to buy marijuana on the black market, with all the risks and dangers that could involve. Medical marijuana sold in stores – which industry leaders called “dispensaries” – was presented as a solution to a problem of human suffering and could thus occupy a moral high ground.  This was a story that marijuana proponents could tell politicians and canvass to voters, pushing for legalization in many states. 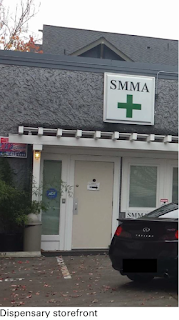 But what about traditional marijuana users who love the intoxication but don’t necessarily need the pain relief? They were both good and bad for the new stores. Good, because patients specifically seeking pain relief from cannabis will always be a minority in a community, so having an additional customer base is helpful for this new industry. Bad, because buyers wanting the intoxicant are exactly the stigmatized kind of “stoner” customer the dispensaries didn’t want politicians, the medical community, the media, and the general public associating them with. What to do?

The dispensaries needed to draw a fine line by taking strategic action. Through clean, stylish store designs they could look enough like pharmacies to avoid the stigma, even if many customers came for the high. Through logos and packaging (such as childproof containers) that mirrored those found in the medical field, they could establish legitimacy. And through changes in terminology, including the term “recreational use” to refer to the other part of their customer base, they could retire many of the stigmatized words describing marijuana and its users.

So is marijuana not stigmatized anymore? Well, it is a growing industry in the places that have made it legal, and a recent Financial Times article asked whether it can become a $100 billion industry. That does not mean it is completely destigmatized, but it has come far enough that there are opportunities for many entrepreneurs. Legal ones.