An article in Administrative Science Quarterly by Gianpiero Petriglieri, Susan Ashford, and Amy Wrzesniewski finds that the answer is… complicated. The reasons give an interesting look at both the world of employees and the world of independent workers. Studying the world of organizational employees, scholars and observers of society have long been interested in how people’s identities become shaped by their affiliation with an organization, and how some organizations strengthen this and make use of it. The classic book “The Organization Man” by William Whyte was part of a greater conversation on how people’s identities and actions may become too connected to the safety of being in an organization as part of a collective.

If the idea of collectives as capturing and constraining people captured employees’ reality, for independent workers, contracting and independent work should mean freedom and the ability to express one’s individuality. And that should be a good thing. The problem is that Whyte may have been right when he suggested that people like collectives and fear the freedom of individualism. The independent workers interviewed by Petriglieri, Ashford, and Wrzesniewski expressed an unmoored existence with wildly fluctuating emotions – like the Tigger and Eeyore fluctuations that one of them mentioned. They also experienced uncertainty about their personal identity, economic position, and the recognition of their work. All of this because independent workers don’t have an organization as a holding environment that defines their identity, determines their economy, and recognizes their work. 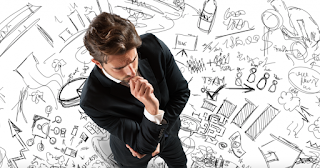 So what do the independent workers do? The key finding is not that they have found one clear solution, but instead that they seize on all sorts of ways to secure their work identities. They make routines for anchoring themselves, not necessarily because the routines help the work. They connect to places where they do the work, almost as a ritual of establishing the place as a context that helps define their individuality. They connect to people who can provide interpretations of what they do and affirmations of who they are. They find ways of connecting their work to higher goals for society, so they can define a purpose of life. Some of their actions are hard to understand for people who work for organizations. I don’t know how a writer can revere the public library as a workspace, but maybe that’s because I don’t know enough about writing. I did software development much earlier in my life, though, and it is a mystery to me that an independent software engineer can describe his home office as a “fighter pilot cockpit” – to me, part of the beauty of software engineering is that it is completely portable, so places are unimportant.

When actions are hard for outsiders to understand, have seemingly precarious links to outcomes, and are highly varied across person, time, and place, they display all the signs of having a function. In this case, the function is to hold on to and cultivate an identity in the absence of a collective, and to manage the emotions that come with independence. We may find that the new economy has many more unmoored people holding onto their identities in ways we’ve not seen before.