It is well known that firms ask for favors from the state and often get them, with examples ranging from all the secretive lobbying in the U.S. to the land use permits that politically connected firms seem to get more often in many developing nations. But what do the firms give in return? In democracies, the answer is easy: money. Donations to help re-elections are channeled to politicians’ election campaigns from firms and their owners through Political Action Committees in the U.S., ensuring that the politicians remain grateful and compliant. Money does not work as well to secure the favors of state officials who are not elected, however, unless they are corrupt, so the question is what can firms do when seeking favors from unelected officials?

A recent article in Administrative Science Quarterly by Danqing Wang and Xiaowei Rose Luo explores this question using data on Chinese firms during the market reform in the 10 years starting in 2001. They take advantage of the fact that provincial government officials and party officials have different goals, as do officials near retirement and younger officials with much of their career ahead of them, to show that there is a very close relation between the goals of important state officials and a very consequential firm action: diversification through the acquisition of failed firms. This was a period in which many state-owned firms that had enjoyed significant state support before the reform failed and laid off their workers, creating the potential for social unrest. Other independent firms could help this unemployment problem (albeit unprofitably) by acquiring the failed firms and continuing operations. Whether they helped or not was closely tied to the careers of state officials. 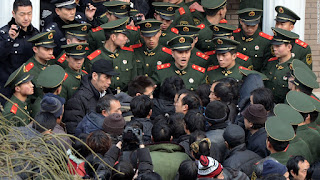 Wang and Luo went one step further in showing that political pressure changed firms’ diversification. They looked at whether the provincial level of civil unrest could explain the firms’ reactions, whether retirement alone could explain it, or whether it was a combination of the two. It turned out to be the combination: layoffs, retirement, and civil unrest together made firms help the governor by diversifying to absorb the laid-off workers.

So we know that firms are politically sensitive and can do useful things like reducing unemployment. That’s often a good thing. The problem lies somewhere else. The relationship between firms and the state is one of give and take, so if you see firms giving they are usually taking something else. If you can’t see what they are taking, you should probably start worrying.