When It Comes to Group Conflict, We’ve Been Tricked

Here are three things about group conflict that managers and researchers think they know: Group conflict is common, it continues unless there is an intervention, and it reduces group performance. Are they correct? Actually, they are wrong, wrong, and wrong. These are the conclusions from research on group conflict done by Priti Pradhan Shah, Randall S. Peterson, Stephen L. Jones, and Amanda J. Ferguson and published in an article in Administrative Science Quarterly.

Why is there a gap between managerial belief and reality and – even worse (for scholars) – between research and reality? To start, let’s take groups apart. Group conflict means that there is conflict among most or all of a group’s members. But many groups contain a difficult person who creates conflicts, and these are not actually group conflicts because they center on that individual. Other groups contain people who pair up poorly and are in conflict with each other, and such dyads are not group conflicts either. The problem is that such conflicts can be confusing because the difficult person (and perhaps people in contact with him or her) thinks the group has a conflict, and so do the poorly paired people. Some things that look like group conflict are not. 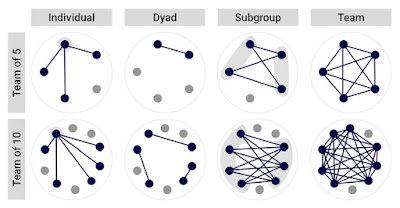 Now look at conflicts over time. Do they stay the same if there is no intervention? Actually, they can shrink, stay the same, or grow. That is true both for true group conflicts and for individual or dyad conflicts. Many conflicts that occur in groups become group conflicts only if they grow; otherwise they stay minor or even disappear. Finally, consider how conflict affects performance. The common belief is that conflict worsens performance because it cuts down communication and joint problem solving. That seems intuitive, but it also seems to hold mainly if the conflict is a true group conflict rather than one involving an individual or a dyad. I certainly know how to work around a difficult individual, and I bet you do too.

What about group performance? The low level of group conflict is good news, with most groups doing quite well because their conflict – if there is any – involves only a few members. The news is even better, in fact, because groups with individual or dyad conflicts have higher performance than groups with no conflict. How can this be? To me, it looks a lot like the findings from research on minority effects on jury deliberations. Having one or more members disagree with the rest of the group can be stressful, but it has the benefit of providing a deeper consideration of how to best conduct the work. Even if those members are wrong, they improve the group’s performance by forcing the rest of the group to consider their processes more carefully.

Being wrong about so much should be a serious call to reconsider what we know about groups. There is an important reason that managers and researchers are so often wrong: It is easy to confuse some group members’ feelings that there is conflict with an actual group conflict. Individual impressions do not mean much unless they are connected with actual examination of the group, which many managers and researchers overlook because they take the statements of the noisy individual or dyad to be the whole story. Management is about the big picture, but it must also be about attention to detail.